The first time i saw people strolling was in "American Graffiti".The dance stuck in my mind allthough i was too young (my early teens!) and i barely heard this type of music or dance & dress in this style!
I remembered i was rewinding the vhs to see it again and again!!!

So it wasn't until many years later, when i adopted this lifestyle & got into rock & roll that i started dancing! I begin with six count basics,tryed some lindy hop and learned a few "modern strolls".Somewere between there i remembered this stroll dance that i never have seen it dance around in Greece or any other place i happend to be in.I asked and nobody new the steps,so i made a little research and this article and video were the only related things i could find (well sometimes simple things are harder to find) !

It's easy and you can learn it in 5 min!The only problem is you need to find a whole bunch of couples to dance it with you!!!!lol 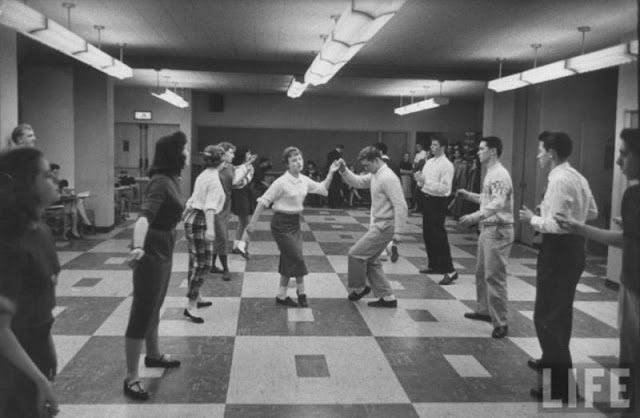 The word stroll can be used to refer to any repeating formation line dance. If you search YouTube, you'll find lots of modern "strolls". However, if you are looking for the classic line dance of the 1950's "The Stroll",you are in the right place.
It is performed to slow swing and rhythm and blues The stroll is popular throughout the swing scene in Europe (strange as it's an American dance).
The emergence of "The Stroll" as a recognizable dance is due in large part to American Bandstand, a popular televised dance party that began in 1954. Initially, the show's regulars created the popular dance called the Bunny Hop. Following this success, the kids began churning out new dances for every new beat, including The Stroll, a slow, simple dance, where two lines - boys on one side, girls on the other - faced each other, shifting from left to right, then back again. The fun came when the couple met in the middle to strut down the aisle, all eyes on them. The dance was inspired by Chuck Willis' hit C.C. Rider. It became so popular that Willis was dubbed "King of the Stroll." But the dance soon got a song of its own when Dick Clark suggested to the Diamonds that they create a song specifically for the dance. The Diamonds were already hot with their hit Lil Darlin' (1957), struck gold again with The Stroll --- famous for its opening line,"Come, let's Stroll.".

The Steps
The stroll is done in two parallell lines (leads on one side, follows across the divide.) A simple basic step-pattern is performed in such a fashion that the line advances, or moves one pace with each pattern. Individuals on each end pair up and perform a "shine" routine as they proceed down the line; at the end, they separate and rejoin the lines. This formulation is part of many "contra" dances that were done in the US and Europe for centures.

Stand, feet about 24" apart. (this is "open")
You are now standing with feet apart in open stance but about a foot to the right of where you started The next bar (8 counts) is the mirror image
The opposite line does the mirror image of this. Boys in one line, girls in the other.
At the top of the next bar, the persons on each end join in closed position and execute twirls, promenades, etc, etc as they proceed to the far end of the lines where they separate and become part of the line again. With each bar, the line advances so that a new couple forms and begins the promenade.
Here is a video of Dick Clark talking about the Stroll while the kids on Bandstand perform it.